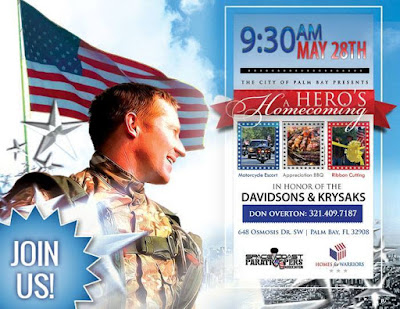 Please join the City of Palm Bay, Space Coast Paratroopers Association, and the Homes for Warriors program on Saturday, May 28, 2016 at 10:00am for a joint ribbon cutting ceremony   as we welcome the Davidson and Krysak families to their new homes

A motorcycle escort will be provided  Saturday May 28. Limousine will arrive at American Legion Post 117 around 0915am. Kickstands up at 0930 sharp to escort to ribbon cutting. Ribbon cutting is at 1000 hrs. followed by a brief award ceremony and food. Let's come and bring our young Warriors and their families home in a BIG way!!!

Davidson Family Story
Service in the military runs deep in the Davidson family, well over four generations of Davidson’s have served, tracing back as far as can be recalled.  So, it was no surprise when in 1995 Eric Davidson decided to enlist in the United States Army.

Serving as a Staff Sergeant in the 3rd Infantry Division, Eric was first deployed in 2002 for Operation Enduring Freedom.  In 2003, Eric deployed a second time for Operation Iraqi Freedom. It was during this tour that Eric was traveling in a convoy when his unit came under direct enemy fire and he subsequently sustained severe concussive injuries. Upon his return in August 2003, he was sent to Walter Reed where he was diagnosed with a Traumatic Brain Injury (TBI).

While receiving treatment, Eric was stationed at the Military College of Vermont where in July of 2004 he met his wife, Megin.  They were married in February of 2005 and now have two sons, Kaiden, 10, and Tairen, 8.  Eric was stationed at Norwich until his retirement in November 2007.  After retiring, he moved his family back to his hometown in St. Cloud Florida.

Now calling Florida home, the Davidsons still face the repercussions of  the TBI’s effect on Eric’s health. It has not been easy.  Megin turned full time caregiver as they navigated doctors’ appointments and hospital visits and they now face the new diagnoses of Melanoma.  There is still a lot of uncertainty as they move forward with treatment.  In July 2014, Megin learned about the Homes for Warriors program and the family applied that same month; when the Davidson’s application was accepted, they were put on the list to receive a new home.

“The stability of owning a mortgage free home affords us the opportunity to focus on Eric’s recovery. This in and of itself is a great blessing. We look forward to supporting the program in its efforts to provide the same opportunity to other deserving military families” Megin said.
According to Eric, “It has been a long road, but there is no question about what this means for our family. This home provides consistency and stability for us and our children.”

Krysak Home
Born in Alaska and raised in Denver Colorado, Abraham Krysak knew that he wanted to do something meaningful with his life. To him, that meant service in the United States Marine Corps. So, in 1999 he took the step and joined the Marines.

During his time in service, Krysak was deployed multiple times and saw his share of the world, circling the globe twice. He spent time on the U.S.S. Belleau Wood where he conducted global security operations. He was a part of both operations, Enduring Freedom and Iraqi Freedom; and was involved in the push towards Baghdad, among the first to invade. Returning home in 2003, Krysak was honorably discharged after 5 years of service.

After his discharge, Krysak was faced with the reality of finding his place in civilian life again. He worked many jobs in an effort to find his niche. For a time, Krysak couldn’t find anything that suited him. He traveled around the United States a while, during which he dealt with residual injuries from his time in service. Eventually, Krysak made his way down to Florida in 2012, and was able to receive the assistance he needed to help him adjust to civilian life. In 2013, Krysak met Florida native and future wife, Tammie. Shortly after, they were married and their, now, family of four call Florida home and enjoy being close to Tammie’s family.

The Krysaks first heard about Palm Bay’s Homes for Warriors program through a member of the organization. They got connected to the program and their application was accepted. Now the Krysak family eagerly awaits their new home. The outpouring of support from the community and volunteers has touched the Krysak family deeply. According to Krysak, “this has been a really good road, the program has been so good to me and my family, you can’t ask for more.”

Thank you to My Platinum Sponsor 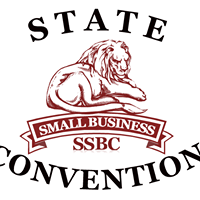 Posted by ltnews.brevardtimes.com at 11:31 AM