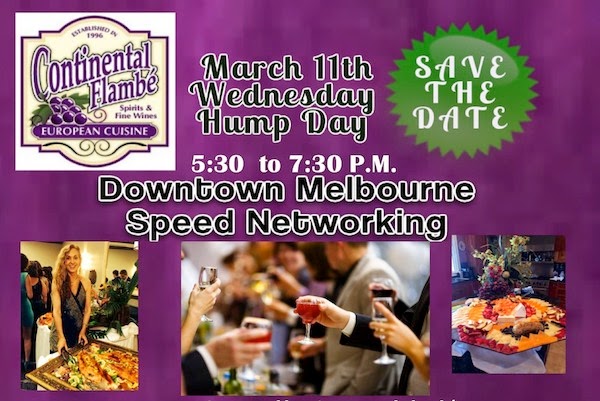 Raffles were given away by Melbourne Downtown's   La Vita Bella Hair Lounge, Acadian Aesthetics, and  special guest appearance  on the  The Laureen Radio Trent Show, WMEL 1300 AM, with some ladies sporting fashion from the Pink Zebra.

Since its debut , Downtown Melbourne Speed Networking has earned the  distinctive name
" Downtown Speed Networking Wednesday Hump Day" , with  networking, mixing and mingling at a local small business downtown each month with attendee's from the entire community of Brevard County, and that's not all.  This is not of your typical network event!

HRSS Consulting Group/LLC's Karen Gregory hosts this 90-minute workshop intended for small business professionals, especially for those who really do hate to network. This workshop is unique because it includes a mixture of training AND speed networking.

So for those who are anxious about networking, but know they need to do it, join us for this fun one-of-a kind workshop.  Karen Gregory of HRSS Consulting Group LLC will be sharing educational business tips and then shake up things with some speed networking! You will leave having made new business contacts all while having fun.

Posted by ltnews.brevardtimes.com at 5:40 PM